How to Handle Flooding from Hurricane Sally? 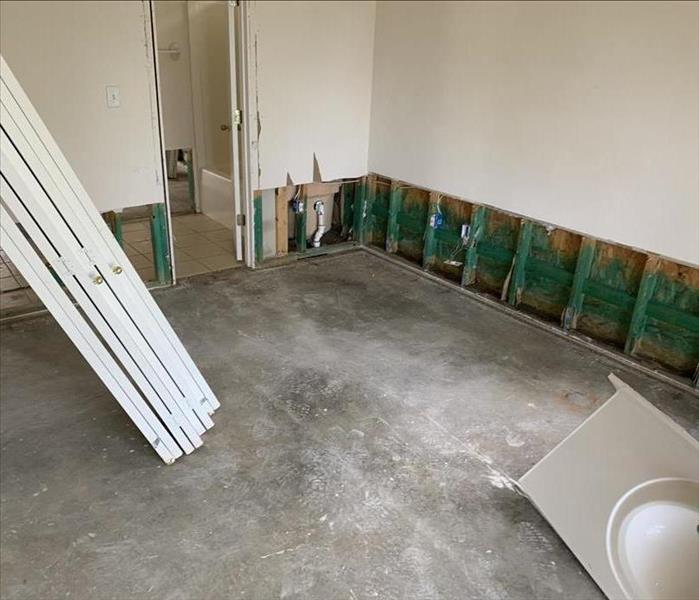 A flooded room after being dried and having the floor removed and the sheetrock has been flood cut.

HOW TO HANDLE FLOODING FROM HURRICANE SALLY?

Hurricane Sally brought in a large storm surge and days of rain that caused many homes and businesses in the Pensacola and Milton area to have severe flooding. The waters began to rise early and continued on until roads, properties, vehicles, and eventually homes were filled with water. Much of Hurricane Sally’s severity was unforeseen. Many people went into the night under prepared, and it was not until it was too late that they saw the waters were entering their home. SERVPRO responded to help in homes where people ended up having to find refuge on top of their furniture because their entire home was flooded. SERVPRO of West Pensacola specializes in emergency response to water damage. We were taking calls during the Hurricane and were able to respond in a timely manner, getting there in time to extract the water, dry the contents and prevent further damage. Contacting SERVPRO of West Pensacola as soon as possible makes a big difference in the amount of salvageable materials. SERVPRO recommends first gathering up your most cherished valuables to save them from the water, and let the SERVPRO technicians take care of the homes.  Along with extracting water and drying homes damaged by Hurricane Sally, SERVPRO of West Pensacola also helps with removal and demo of parts of your home or building that have to be taken out.

A major advantage of working with SERVPRO of West Pensacola is our willingness to work directly with your insurance company and FEMA. It is important to know who to contact, and to talk with your insurance company about what kind of coverage you have for floods and storm damage. It is also important to note the differences in storm coverage and flood coverage. For those living on the water in areas like Pensacola Beach, Perdido Key, and Milton, they experienced water damage from both wind driven rain as well as rising flood waters. All together all of us at SERVPRO of West Pensacola are thankful to be in a position where we are able to help our community through a difficult situation. Helping people get to the point where they can feel more in control after the damages to their home, and on the way to having things back to normal.